New speaker models with WiSA wireless transmission include the BeoLab 18, a striking replacement for the classic BeoLab 8000, and a dodecahedronal subwoofer, the BeoLab 19

Immaculate Wireless Sound: it’s something of a claim, but that’s the label Bang & Olufsen is putting on its new range, designed to deliver everything from stereo to full 7.1-channel surround sound without cables connecting the speakers.

That means new speakers on sale in November, as well as wireless upgrades on the way for existing equipment.

And, being B&O, the new models are attention-grabbing – from the BeoLab 18 (above), with its lamella ‘vanes’ in place of a conventional grille, to the BeoLab 19 subwoofer, with its dodecahedronal enclosure. That’s 12-sided to you and me.

The new models adopt the WiSA (Wireless Speaker and Sound Association) standard, backed by a range of other manufacturers, allowing up to 7.1 channels of 24-bit/96kHz HD audio to be transmitted with no compression, using frequencies in the 5.2-5.8GHz band – usually employed for military and similar purposes – and intelligent channel-selection.

While maintaining full WiSA compliance, the Bang & Olufsen system takes things a step further by allowing users to combine wired and wireless speakers in the same system with no latency. Using one of the company’s BeoVision 11 TVs, which has had wireless transmission built-in in recent production, ready for software activation, up to 20 channels can be used: two in the TV itself, eight WiSA wireless channels and 10 more via the company’s wired PowerLink system.

Not surprisingly, B&O is calling this combination Wireless PowerLink, but the new WiSA-compliant speakers will also work wirelessly with any WiSA-certified TV, Blu-ray player or AV receiver – as I’ll explain in a moment or two, it’s all part of a new openness at Bang & Olufsen, for so long an advocate of the ‘total system’ approach.

On a recent visit to Bang & Olufsen HQ in Struer, Denmark, I got an insight into WiSA, the Wireless PowerLink system and the new models ahead of their launch, with a range of presentations including sessions with DSP technology specialist John Hammer Madsen, Senior VP of Product Creation Lou Shreurs and the ever-entertaining and informative Geoff Martin, the company’s ‘tonmeister’.

Martin, seen above with a prototype of the BeoLab 18, explained how the audio and design functions interact, and how his job exists to make the designers’ lives difficult(!) by making ever-greater demands of the sound quality of products.

On a tour of the acoustics department he showed some of the tools the company uses in its design process, including the famous Cube (below), used for speaker measurement, and one of the rooms where the company’s highly-trained listeners audition designs.

BeoLab 18
And so to the speakers themselves, and the replacement for one of the company’s best-known models: the BeoLab 18 is described as an ‘evolution’ of the celebrated BeoLab 8000 ‘organ pipe’ design, and while some elements remain, such as the tapered lower section of the cylindrical enclosure, just about everything else is new, both outside and in.

The most obvious changes are the acoustic lens tweeter array – as found in B&O speakers, TVs and in-car systems – atop the enclosure, and the 21 lamella ‘vanes’ covering the main drive units. As standard these come in black or white composite on the £3990/pr speakers, available with either bases or wall-brackets, while the solid oak seen in the pictures is available as a £790 option.

And there’s plenty under the skin to back up the looks: two custom-made 10cm mid/bass drivers are used, along with two 160W Class D amplifiers, and a digital sound engine tunes the response of the drive units to take account of the lamella design, as well as delivering Adaptive Bass Linearisation and room position control.

In common with all the new speakers, the BeoLab 18s offer wired connections along with the wireless capability – now with standard RCA phono inputs as part of the company’s new openness when it comes to interoperability with other brands.

That’s a real change for Bang & Olufsen, which for so long has operated on a closed-system basis, where buyers would buy a music centre, TV and speakers from the brand. These days, much as changed, as I found out in the shop concept set up in the basement of corporate HQ – The Farm. here we were shown not only how the company is working with a wide range of home automation, lighting and security suppliers to offer one-button functions from the selection of a TV channel to a complete ‘put the house to sleep’ mode, all using the company’s simple remote control handsets (below) 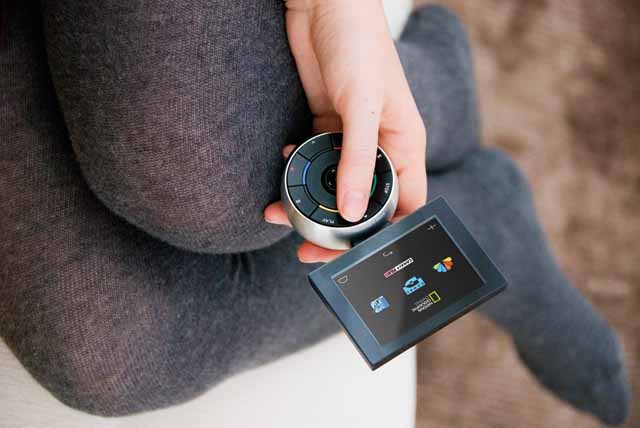 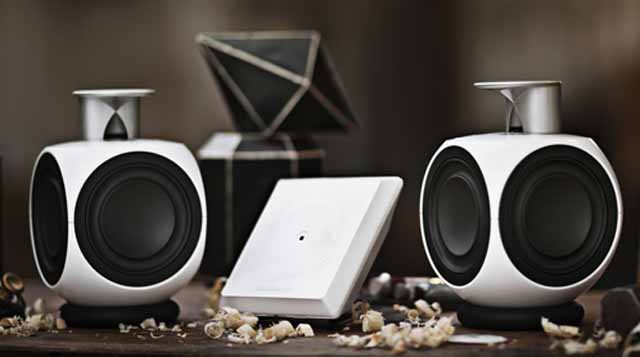 And if you don’t want an entire Bang & Olufsen system, you can choose something from the B&O Play sub-brand, complete with AirPlay connectivity enabling you to use iOS smartphones and tablets as a source, or combine a pair of the company’s active speakers with your iOS device using the functional-looking Playmaker (above), an Airplay interface usable with he company’s mainstream speakers all the way up to the still futuristic-looking BeoLab 5, with its ‘flying saucer’ acoustic lenses. 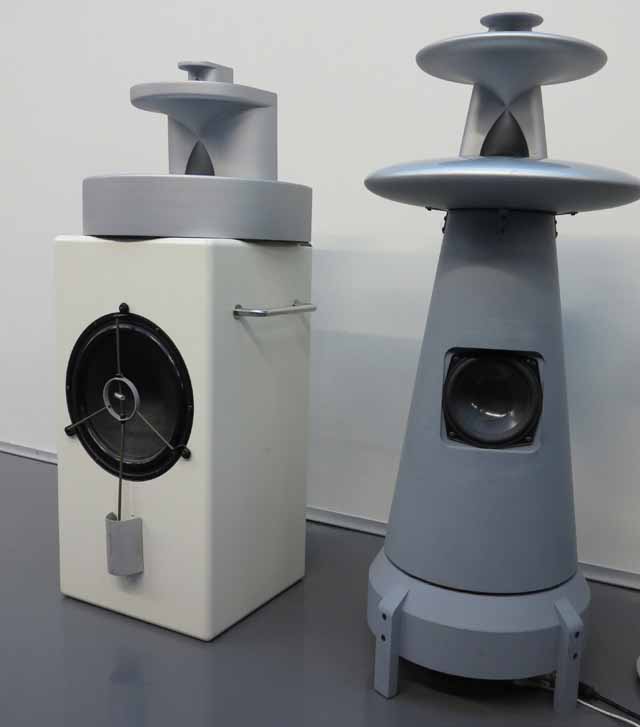 On the subject of the BeoLab 5, I also spotted a couple of the old prototypes of the speakers during our tour of The Farm: not surprisingly, the one on the left above is known internally as the washing machine. 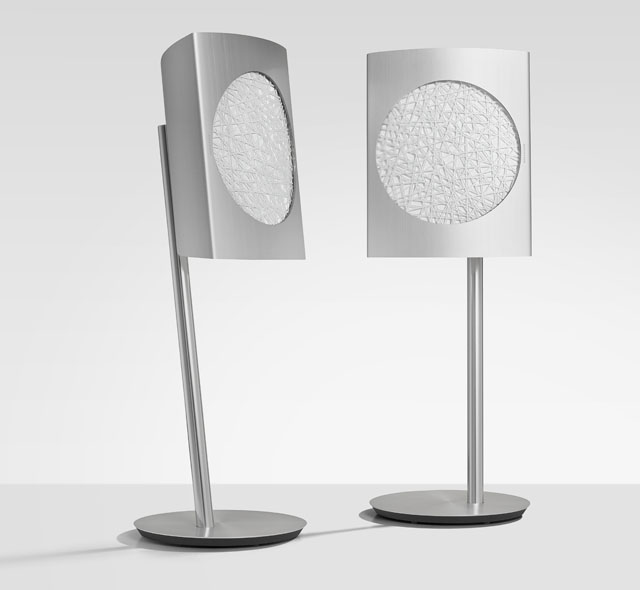 BeoLab 17
No such basic finish on the new speaker models: the compact BeoLab 17 (above), in a triangular cabinet made from a single piece of extruded aluminium, clearly with some difficulty judging from the skip I noticed when touring the company’s aluminium plant, which was gearing up for full production: each of those discarded enclosures represents a cost of around €50, and all they’re fit for is recycling.

It’s another part of what the company sees as the only way to achieve perfection in its products, and which could be seen as wilfully making life difficult for itself: the enclosures for the BeoLab 17 is anodised and given its surface finish while still in its raw state, with a strut within the cabinet and no hole for the grille. Only then are the cabinets inspected, some rejected, and the good ones then machined out, and finished again.

Similar thinking, by the way, informs the speaker grilles for some of the company’s TVs, which have over 5000 tiny holes perforating the metal to allow the sound through: it might seem logical to stamp out the holes, but Bang & Olufsen drills them individually.

Back to the BeoLab 17, and it uses a 15cm mid/bass driver and a 19mm tweeter, two 160W amps and a custom-tuned version of the digital sound engine. The sealed cabinet has a volume of just 2.8 litres, and the speaker can be used on a dedicated floor base or stand, put directly on the floor stage-monitor-style, wall-mounted or even used on shelves. A bass equaliser allows a choice of free-standing, wall or corner positions, and like all the new speakers the BeoLab 17 offers a choice of wired or wireless connection.

Available with either black or white end-caps on the enclosure, and with a choice of white, black or blue fabric front panels, or a distinctive ‘broken ice’ look, the speakers sell for £2590/pr. 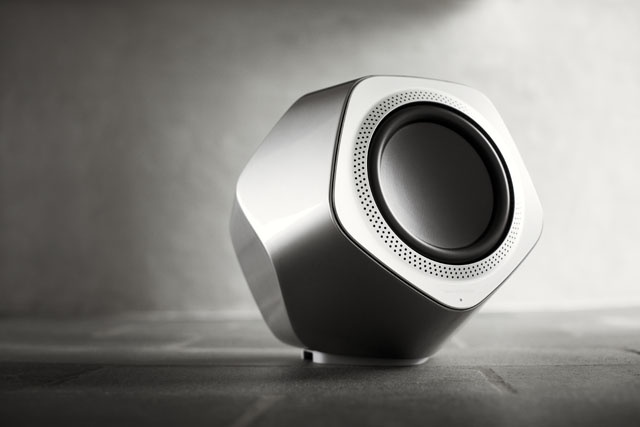 BeoLab 19
Completing the range is the BeoLab 19, a wireless active subwoofer with that dodecahedronal enclosure, B&O Speaker Category Director Lars Fredsgaard saying that ‘Whether you’re a film fan, a Wagner aficionado or into heavy metal, richly cultivated bass adds a visceral dimension that you sense with more than your ears.’

The £2195 BeoLab 19 uses two custom-made 20cm drivers, each with a 160W Class D amplifier, placed back to back in separate enclosures. This was what the original acoustic prototype looked like! 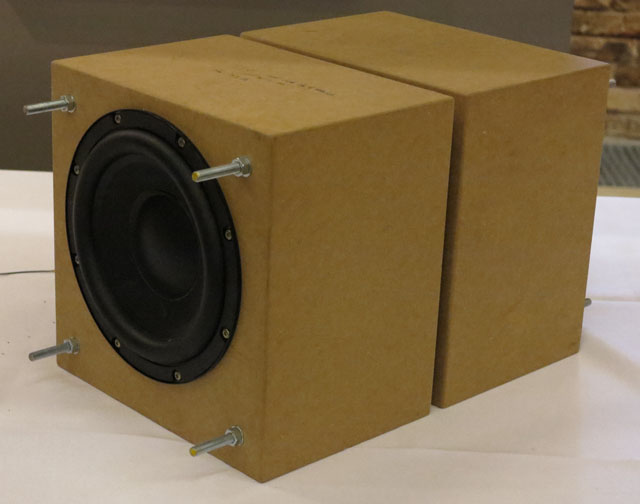 As in all the new speakers, there’s thermal protection and Adaptive Bass Linearisation, and the sub uses anodised aluminium rings around the drivers, and a choice of matt black, white or grey for the main housing.

The design of all the new speakers is by Jakob Wagner, of David Lewis Designers, and it was touching to see that the Bang & Olufsen section on the lower floors of the Struer Museum has a substantial area paying tribute to David Lewis. The British designer of so many of B&O’s most celebrated products of recent times died just under two years ago.

← Fiio adds 24/192 asynchronous USB DAC function to X3 digital player
Amidst all the weeping and wailing about the end of plasma, are we missing the bigger picture? →