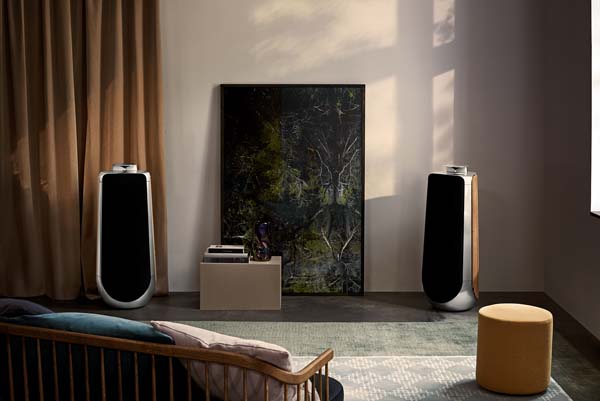 Just had an interesting flying visit to Denmark to hear the new Bang & Olufsen BeoLab 50 speakers, launched today. Trips to the acoustics department in Struer are always fascinating, but this one was doubly so for various reasons – not least that this time the company seems to have produced a speaker that looks like a speaker!

The new BeoLab 50 takes a lot of the technology found in the company’s BeoLab 90-, which was launched almost two years ago, and tames it into a more domestically acceptable form. The shape is striking but not huge, the 61kg per speaker weight just about manageable without heavy lifting gear, and the price – well, the speakers are £11,465.

Three bass units are mounted in each speaker, which is roughly triangular in plan view: the 25cm drivers fire to the front, and to the sides and rear, while there are three 10cm midrange drivers arranged in a cluster – as on the BeoLab 90 – and a single 19mm tweeter.

Of course, being a Bang & Olufsen speaker, that tweeter is not just mounted in an Acoustic Lens assembly, which powers up into view when the speakers are activated, but also has adjustable Beam Width Control, the shape of the Acoustic Lens changing to give wide (90 degree) or narrow (45 dsgree) treble dispersion. It’s a mechanic version of the multi-tweeter system found in the BeoLab 90, and lets you switch from a focussed treble suited to ‘sweet spot’ listening to a wider spread when all the family is gathered.

All of this is controlled via the Bang & Olufsen App.

The speakers also have Active Room Compensation, with a microphone to measure their effect in the room and internal electronics to tailor the sound to suit. Different presets can be set for various listening locations in the room, all under the control of digital signal processing, and the speaker also packs seven 300W ICEpower amplifiers, custom designed for this model.

The speaker has a wide range of input options, with both digital and analogue versions of the company’s Power Link system, conventional RCA line input, coax, optical and USB digital at up to 192kHz/24bit, and both Wireless Power Link at up to 24bit/48kHz and WISA extending this to 24/96.

So how do they sound? Well, after a lengthy listening session in the Struer listening rooms, I had to conclude that these speakers may look (almost) conventional, but they sound anything but. There’s massive bass, seeming unburstable but as tightly controlled as it is extended, and a lovely sense of integration, sweetness and detail in the midband and treble.

If the BeoLab 90 saw the company moving back into the audiophile arena, albeit with a speaker whose form-factor was, to say the least, challenging, then the BeoLab 50 may well win it even more fans in the ‘serious audio’ arena, not least due to industrial design making it look like – well, like a pair of speakers.

Yes, the new model is expensive – would it be a Bang & Olufsen if it wasn’t? But that price begins to make sense when you consider this is a complete system in a pair of speakers, complete with 2100W of amplification per side, and a ‘just add source’ design: for the demonstrations I had the speakers were just connected to the digital output from an Oppo Blu-ray player, with music sourced from disc or my own collection on a USB thumb-drive.

Of course, more comprehensive listening will be required in a known environment before I can really get to grips with what the BeoLab 50 can do, but on this first encounter the new model looks to be every bit as impressive as its massive forbear of a couple of years back – just less mad.

Other interesting discoveries on this very brief trip? The acoustics department at B&O is on the move, from its current location – home of the celebrated ‘Cube’ measurement chamber – to new, purpose-built facilities in what was the Factory 4 assembly area. Already bigger, better listening facilities are taking shape, along with a new anechoic chamber, and I was assured a ‘new Cube’ was in the planning.

And what will become of the current facilities? Well, in very Danish style, they’re going to be turned into a start-up/incubator facility for new audio companies. The new occupants will be able to take advantage of the excellent set-up being left behind – although for now the Bang & Olufsen engineers will also be making use of the Cube, and some other parts of their current home, until the new acoustics engineering facility is completed. As a statement of continuing commitment to high-quality audio in Struer, it’s pretty impressive…