Marantz MusicLink: it’s back, with the new HD-AMP1

To hear of a new audiophile amplifier-in-miniature from Marantz is exciting enough: when you discover it’s also part of the revival of one of the most covetable series in the company’s history, it’s time to take some serious notice.

The HD-AMP 1 first broke cover at the D+M Group’s annual European dealer/press event in the Summer – the ‘European’ remit now extended to take in participants from as far away as Russia, Asia and even Australasia.

After the presentations, and various workshops and demonstrations, we moved on to the main exhibition room – and sitting under the excellent HD-DAC 1 was what looked like a slightly grown-up version of the DAC/headphone amp.

However, it wasn’t giving much away – by virtue of the fact it was a display dummy, with nothing on the rear panel beyond a captive mains lead, as you can see below. 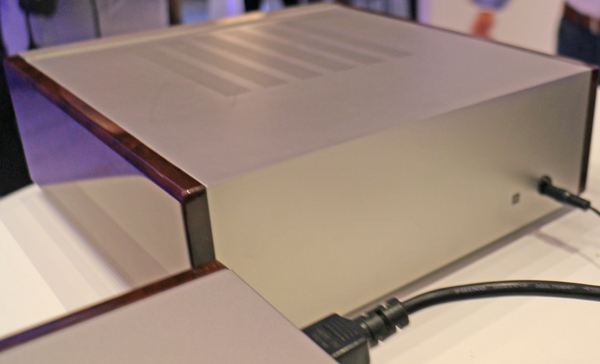 The press information explained that this HD-AMP1 was coming – well, sometime soonish.

It was recently finally launched to the Japanese press at the beginning of November, at which point I engaged ‘pester-power’ mode, and the emails started flying to Marantz Brand Ambassador and all-round audio guru Ken Ishiwata, asking when I could get my hands – and more to the point my ears – on a sample.

After all, I was very much taken with the HD-DAC1, which I have been using as a reference for headphone reviewing since I first covered it for Gramophone back at the beginning of the year: it’s currently away being reviewed elsewhere, and is sorely missed.

So just a read of the specs of the HD-AMP 1, described by Marantz as ‘an integrated amplifier with DAC-mode’, caught my attention.

As well as being a digital to analogue converter capable of handling content up to 384kHz/32-bit and DSD11.2/256, using the respected ESS Sabre DAC, it also delivers 35W per channel into 8ohms, or 70W into 4ohms, and has both digital and analogue inputs.

Also new here is an in-house-developed digital filter set-up: called Marantz Musical Digital Filtering (MMDF), it offers two settings prosaically described as being ‘to cater for different tastes and music’ – which of course is what it’s all about. Also present and correct are – of course – the Marantz Hyper-Dynamic Amplifier Modules, or HDAMs, the players of a major part in the modern Marantz sound.

It also comes in that lovely retro-Marantz look we first saw in the HD-AMP1, complete with the signature ‘porthole’ display and a choice of black or ‘silver gold’ finishes for the solid aluminium front panel, and matching casework with wood-effect side-cheeks.

But the most toothsome elements were saved for last: when it hits the shops in January 2016 it will sell for £799 in the UK – which I have to say is rather less than I was expecting, given that the HD-DAC1 lists for £679.

Even more interesting is that introduction to the product: it says ’Marantz again amplifies its dedication to pure musical performance with the rebirth of MusicLink, a product series launched in 1990 with the focus on reproducing the music essentials from small-size, rarely-seen design components.

‘The aim is simple: to bring the listener all the emotion and musical detail of the original sound studio, combined with an elegant appearance and luxuriant feel. It is not a coincidence that the creator of the delightful new MusicLink Series is once again Ken Ishiwata.’

Ken seems pretty buzzed about the revival of the MusicLink name, and so am I, as I still have an original set-up from many years back, in the form of an SC-22 preamplifier (left) – or ‘active line-stage control amplifier’ – and a matching pair of SC-22 50W monobloc power amps. Hooked up to a very early CD-63 MkII KI-Signature CD player, it’s still pressed into service for reviewing from time to time, and almost a quarter-century on is still performing faultlessly.

As a result I’m very much looking forward not only to hearing how 21st Century MusicLink sounds, but discovering what else is to come in the ‘delightful new series’.

Oh, and the pester-power worked: I’m told am HD-AMP1 sample is on its way to me as you read this. I’ll report back…