Bells, whistles and solid engineering in this all-in-one headphone amp and DAC, plus a smooth, confident sound to make the most of the superb PM-1 ‘phones

Headphone amplifiers are clearly like buses: you wait ages for one, then two come along at once. And so it was, just as I was wrapping up my review of the TEAC HA-P50, that the Oppo HA-1 arrived. And yes, I had been waiting a while for that one to turn up.

I first got to hear the Oppo HA-1 headphone amplifier at the launch event for the company’s PM-1 headphones, which I reviewed some three months ago, and having said in that review that Oppo made things simple for us reviewers by letting us each take a pair of their upmarket cans away with us, it’s taken a few months of cajoling to get the partnering headphone amp home and try it.

That I was keen to do so was something of an understatement: having heard the HA-1 briefly at the launch event, it was clear when I started testing the headphones that, excellent though they sound with a range of amplification driving them, they possibly had more to give when hooked up to the HA-1.

Arguably so they should, given that the headphones are £1099 and the amplifier a further £1199, but then just as the PM-1s are the result of extensive research and development by Oppo’s engineers, so the HA-1 is rather more than just a headphone amplifier, and has been built to sit at the heart of a complete system.

Headphone amp, preamp and DAC
What we have here, in a box about half the width of a conventional hi-fi component, but chunkily put together (as a 5.9kg fighting weight suggests), is a headphone amplifier delivering both conventional output on a ‘full size’ 6.35mm socket and balanced working on a multipin XLR, a preamplifier with both single-ended and balanced inputs and outputs, and a DAC. 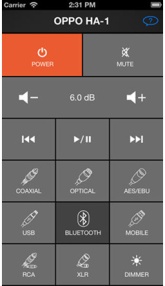 And not just any DAC, but one capable of handling content at up to 32-bit/284kHz or DSD256 (that’s at 11.2896MHz, as opposed to the 2.8Mhz and 5.6Mhz supported by other DSD DACs, and which the Oppo also handles), and with digital inputs on AES/EBU and optical/coaxial S/PDIF inputs, as well as asynchronous USB.

It also has a further USB socket on the front panel, which is compatible with iOS devices – iPods, iPads and iPhones – for content at up to 44.1/48kHz, and just to complete things digital also has Bluetooth (with aptX) for use with wireless tablets, smartphones and computers.

The Bluetooth connection can also interface with an Oppo HA-1 control app, available for iOS and Android devicesand operating all major functions of the amp. This is in addition to the high-quality remote control handset supplied with the HA-1.

In addition, the HA-1 even has a home theatre bypass/unity gain function for use in preamp mode, enabling it to be combined with the front-channel preouts of an AV processor or receiver.

Downstream of that is a Class A fully-balanced output stage, using made-for-Oppo components, while the whole plot is powered by a hefty toroidal transformer.

A choice of displays is available on the large colour panel in the centre of the fascia:  as well as readouts for the likes of input selection, gain adjustment and volume, you can also have information about in which mode and format the amp is working, a ‘spectrum analyser’ (which is essentially pointless, but fun for at least a moment) and a pair of VU meters.

Fortunately you can also dim the display down and turn it off completely!

Too hot to handle?
That’s almost the only practical consideration worth mentioning, apart from the small matter of this being a Class A amplifier, which means it runs hot. Very hot. Almost too hot to touch hot, in fact, but only if you leave it idling – when it’s working, driving headphones, things cool down appreciably.

That’s the way of the world with Class A amps, unfortunately: all that energy’s got to go somewhere, and if it’s not into your lug’oles it’s going to be used to warm your room, which will make for a nice cosy experience on chilly autumn evenings, but was less fun when the mercury was nudging towards 30C.

The HA-1 has been getting a workout of late with USB feeds from my MacBook Air and Mac Mini computers, an iPad Mini via USB and Bluetooth, and the digital outputs of Krell Connect and Naim NDS/555PS network music players. Content has ranged from Internet radio all the way up to DSD5.6 and 24-bit/352.8kHz, and I’ve been using software players including Amarra and Audirvarna on the Macs.

As is usually the way, the HA-1 need no drivers to be used with Apple computers; software drivers are downloadable from the Oppo website for Windows operating systems. 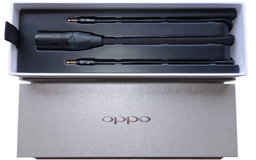 To characterise the sound of the Oppo in one sentence, I’d say it was massively powerful and dynamic, while at the same time rich, warm and relly rather cultured. It makes a fine foil for the remarkably explicit, open and airy HA-1 headphones, which I hooked up to it using the balanced cable Oppo supplied for the review (which was rather short, thus making me aware of the amount of heat the amp was chucking out). 2m and 3m versions of this cable are available to buy as accessories.

The other point worth making about the Oppo system is that it doesn’t suffer fools gladly, in that it’s rather revealing of content at lower bitrates. 320kbps MP3 was just about OK, although noticeably rougher-sounding than via more forgiving amplification/headphone combination, but things were much more acceptable when moving up to uncompressed CD quality, and kept getting better as I moved up to higher-resolution content.

Weight and control
Yes, the Oppo combination sounds rather warmer and more generous in the bass than some hyper-analytical headphone set-ups, but there’s no looseness or lack of control down there – bass-lines are richly developed but at the same time fast and well-controlled, and drums and electric basses have real growl and thunder and drive, as was obvious with some of the prog-rock warhorses I’ve been trawling out of late, not to mention a hi-res version of The Who’s Quadrophenia.

At the same time, the HA-1/PM-1 package does an impressive job with the scale and depth of a full orchestra, delivering double basses and cellos with a real sense of the bite of bow on string, and orchestral percussion with suitable weight and attack. This rich, characterful bass slides effortlessly into a smooth, natural midband and sweet but extended treble to create an overall sound that’s at once highly involving and extremely easy to enjoy.

As I’ve already mentioned, there are other headphones better able to pick over the bones of a recording – for example, the Focal Spirit Professionals, at a fraction of the price of the Oppo package, reveal their studio background by stripping bare every element of whatever you choose to cue up –, but for sheer enjoyment, for that sense of being swept up in the music, in the performance, the HA-1/PM-1 has much going for it.

If all my listening was via headphones, I’m pretty sure I’d have no problem justifying the expense of the Oppo amplifier and headphones, simply because so much of the time I’ve spent listening to them has had me thinking ‘You know what? I could spend a lot of my life listening like this.’

The combination is both intriguing and very seductive: yes, using the HA-1 does change the sound of the PM-1s, adding those undertones of warmth and richness to complement the speed, detail and airiness of the headphones and create an overall impression of weight and dynamic power along with the ‘out of the head’ balance of the ‘phones.

You could easily enjoy the PM-1s without the HA-1 headphone amplifier: I’ve had good results with the likes of the Schiit Magni, the TEAC already mentioned, and the headphone stage built into my Naim Supernait 2 integrated amplifier.

However, as a one-stop solution for audio from a variety of computer-type sources – from desktops and notebooks to handheld devices – as well as more conventional hi-fi players, network streaming devices and even analogue components, the HA-1 has much to commend it, and when used with the PM-1s it does have an obvious synergy, the sound of the two proving extremely attractive, involving and fulfilling.

When I first started listening to the PM-1 headphones I was impressed that Oppo had managed to stake its claim in the luxury audio market with so impressive a design; the arrival of the HA-1 headphone amplifier has done nothing to diminish that admiration.