From time to time, you have to challenge your preconceptions of what constitutes ‘serious hi-fi’: fortunately, the Peachtree Audio nova125 is everything a ‘normal’ amplifier isn’t 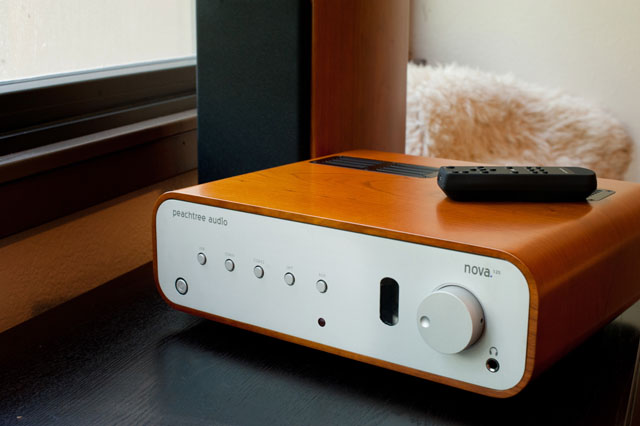 It’s mainly designed for use with digital sources, yet has a valve in its preamp stage; it’s capable of a hefty 125W per channel output, yet comes wrapped – yes, that’s the only suitable word – in a curvaceous sleeve, available in a choice of finishes; and it’s not the most ‘hi-fi’ amplifier in the world, but is a seriously enjoyable listen.

The Peachtree Audio nova125 is just about everything you wouldn’t expect a £1249 integrated stereo amplifier to be: based on the company’s original product, the decco – they’re big on lower-case at Peachtree –, it’s very much designed for the download generation, more likely to be playing music on a smartphone or tablet, computer or network streaming device, rather than via a CD player or even a turntable.

To that end it has just one analogue input, but four digital: asynchronous USB, two electrical/coaxial and one optical. And it’s described by the manufacturer as ‘Four Products in One Chassis:  24/192 Upsampling DAC, 125 Watt per Channel Amp, Hybrid Tube Pre-amp and Headphone Amp’.

Well, if you put it like that, it looks like you’re getting quite a lot for your £1249…

The intentions for the product are pretty clear in Peachtree’s sales pitch: it says ‘When you connect the digital output from a Sonos player, a Squeezebox, an Apple TV or Apple Airport Express you’ll get the full benefit of the quality built into these products. And when you connect your computer to the nova125’s digital USB input – we think you’re going to love what you hear from your music library from compressed music files to high resolution!’

Haul the amplifier out of its substantial box, and it looks a lot more imposing than the pictures suggest, especially in the gloss black of the review sample. It’s almost 37.5cm wide and stands a smidge over 11cm tall, and while that black finish certainly looks classy against the silver of the metal front-panel, you can also have the amp in a choice of rosewood or cherry veneers for £50 extra. 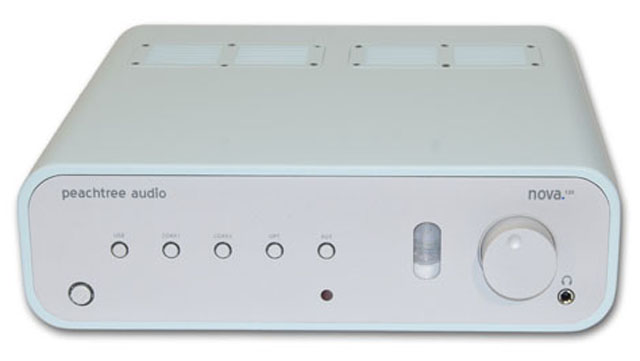 Or you can tell Peachtree you’d like to have it finished to match your eau de nil curtains or taupe wallpaper, and it shall be done – to order, of course.

As if all that wasn’t eye-catching enough, there’s a little window in the simple six-button fascia through which the single valve – a 6N1P – can be seen. It’s used in the preamp stage to add a spot of warmth and smoothness to the sound at the push of a button on the remote, and when in use it’s lit up, just to make the point. Peachtree says it’s there ‘to add a dose of warmth and take the hard edge off compressed audio sources like MP3s’.

Also under the skin here is asynchronous working for the USB input – there’s a driver disc in the box for your computer, though you won’t need it if you’re running a Mac – and upsampling of signals below 24-bit/192kHz to make the most of the ESS Sabre 903 DAC used here. And just to make sure electrical noise doesn’t find its way through to the amplification, there’s galvanic isolation between the digital inputs and the amp stages.

The power amplification itself is from Danish company ICEPower, part of Bang & Olufsen, and is designed to drive speaker loads all the way down to 2ohms, while increasing its nominal 125Wpc (into 8ohms) to 220Wpc when 4ohm speakers are used.

Speaker-friendly
The nova125 is effectively a decco65 – the current version of Peachtree Audio’s debut product – with an enhanced power amplifier section and power supply provision, designed for greater dynamics and detail. That makes it an amplifier designed to drive a wide range of speakers without falling over or showing signs of distress. It’s all part of the user-friendly brief for the nova125: whether you’re thinking a small pair of speakers sitting on your desktop, or a pair of floorstanders to fill a larger room, the Peachtree amp will do the job.

Completing the specification is a headphone section fed directly from the preamp, but still capable of muting the speaker outputs when a jack is inserted in the proper 6.3mm socket on the front panel – no messing around with little 3.5mm micro-jacks here! –, and a pair of preouts to enable the connection of an external power amp or an active subwoofer.

Now, you wouldn’t expect the nova125, for all its semi-retro cuteness, to be a shy violet – after all, the company, which by the way has on its staff an ‘Ambassador of Awesome’, says this about the amp: ‘More power. You want to play your music louder without distortion. You want to feed your power hungry loudspeakers all of the watts they deserve. You want to fill a cavernous room with a throbbing bass line. You need more power. You need the nova125.’

Exciting, but in a good way
Fortunately for all concerned, the amp lives up to its billing: this is one seriously exciting product, but not quite in the usual ‘hi-fi’ exciting way. Rather than a bright, exciting, highly transparent sound, of the kind able to deliver all the sting of a cymbal and all the brain-shredding awfulness of highly-compressed music, the nova125 does the hard-hitting thing, but at the same time keeps things big, rich and deeply impressive, whether with those small desktop speakers or some hefty floorstanders able to make the most of its fast, well-extended bass.

Yes, it’ll do smooth and lush and warm, as you might like for a spot of late night jazz or soul at modest volume levels (hint: kick in the valve stage for the full smoochtastic effect). But when you decide to crank it up and party, it becomes every amplifier you wanted when you were somewhat younger, rumbling out bass-lines while driving the music hard, and with sufficient openness up in the midband and treble to make sure vocals and solo instruments sing out in best ‘can’t help joining in’ style.

And that’s as effective when pumping along through electro tracks as it is when some air-guitar is called for, with the added benefit that when you’ve enjoyed a track so much you want to play it all over again, but LOUDER this time, the nova125 has the muscle to let you do just that. I ran it with my array of ‘usual suspect’ speakers, along with a pair of NEAT Motive SX 1s I’m getting used to for a forthcoming review, and every time the Peachtree made me want to listen more, rather than getting on with the job in hand.

In absolute terms, this isn’t the most ‘hi-fi’ amplifier you can buy for this sort of money, but it is considerably more fun, across a wide range of music styles and file formats, than many a more ‘conventional’ amp at or around its price.

I know which would get my vote…

← Amidst all the weeping and wailing about the end of plasma, are we missing the bigger picture?
Pioneer’s getting back into the TV business – well, almost… →