REVIEW: Linn’s Sneaky DSM – like a Kiko, but invisible

There’s a lot to be said for Linn’s Kiko system: it’s an interesting designer twist on the company’s streaming products, and in many ways a fine add-on for anyone already set up for music streaming, but wanting a simple solution in another room.

However, if you want something less of a style statement and more – well. almost invisible – the solution may be the company’s £1749 Sneaky DSM system: as the name suggests it’s more or less designed to be hidden away, and yet it delivers all the functionality of the Kiko in a ‘just add speakers’ version.

Use it with a smartphone, tablet or computer as a means of ‘driving’ it, and you can actually put the Sneaky DSM away in a cupboard: there’s no need whatsoever for ‘line of sight’ remote control.

In fact, apart from the speaker outputs, the only direct connection required is an Ethernet network hook-up: in common with other Linn network music products, the Sneaky DSM has no Wi-Fi connectivity, Linn believing a wired connection gives the most stable connection, especially for higher-bitrate content.

Of course, you could always get round this with an Ethernet bridge, or (whisper it) the use of Ethernet-over-mains adapters.

So what’s in this compact box, just 35cm wide and a smidge under 5.5cm tall? Well, the Sneaky DSM is a network player, just like all the other Linn DS products, and can handle music in FLAC, WAV, Apple Lossless/ALAC, MP3, WMA (not lossless), AIFF, AAC and OGG audio formats with up to 24-bit/192 kHz native sample rate, and will also stream internet radio, podcasts and the like.

Services such as as iTunes, YouTube, Spotify, and BBC iPlayer can be played through the Sneaky DSM using a computer running Linn’s Songcast software, and the Kinsky control interface can be used on Apple iOS or Android portable devices, as well as computers running Windows, Mac OSX, Linux or Pocket PC. 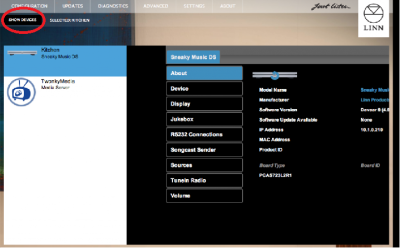 Also available is Linn’s Konfig software (above) which is handy for initial set-up of the unit, and can also be used to access detailed adjustments, such as the setting of unity gain on the single line input to permit use with an AV receiver.

On the subject on inputs, the Sneaky DSM also offers two digital inputs and three HDMI for the connection of external sources, and also an HDMI output to loop video signal through to a TV. There’s even the opportunity to set the analogue output to fixed or variable level, allowing a future upgrade with external power amplifiers or just the connection of the unit into a conventional preamplifier or integrated amp.

Mind you, there might not be too much cause to think about that for a while: the Sneaky DSM delivers 33Wpc into a pair of speakers or, should you have biwirable speakers and want to biamplify them, 4x33W.

Output is delivered via Neutrik Speakon connectors (left), as is the case with the Kiko: wiring diagrams are provided to configure these for single-wired or biwired use, or a supplying Linn dealer will be able to set the cables up for you.

PERFORMANCE
I  always find coming back to Linn DS systems takes a short period of re-familiarisation before I can use the Kinsky screens instinctively, but I’m getting better at it with experience, and so the idea of queuing up (or cueing up?) music for playback via the Sneaky DSM soon began to make sense. 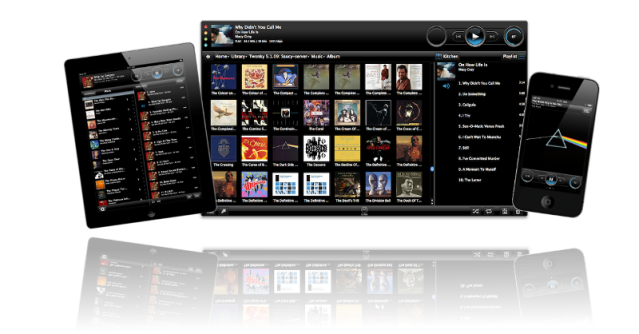 In fact, once you’re set up, with the Kinsky-running device, the NAS or computer holding the music and the Sneaky DSM all on the same network and connected to the internet, the way the Konfig software walks you through the set-up of the device is exemplary, and the Kinksy interface works very well.

I used the Sneaky DSM with a range of speakers, including my usual Neat Iotas and PMC GB1s, along with a pair of Focal Aria 926s I had passing through for review, and what was very clear was that, while the system may ‘only’ deliver 33W per channel, unless you want to fill very large space with music at extremely high levels, that output is more than sufficient to deliver music with all its excitement and dynamics intact.

Only when you push the Linn really hard does the sound begin to thicken up and take on a hard edge, but it does so in an entirely progressive fashion, so it’s clear when the limits are being approached. Those limits, by the way, are unlikely to hamper the enjoyment of all but the most crazed wall-shaker.

Instead, the Sneaky DSM does that very Linn thing of making music rather than making a fuss about how well it’s doing so. Whether with some hefty orchestral stuff or a delicate solo instrument, with acoustic jazz or electronica, it strikes just the balance of weight and speed, openness and smoothness, drawing you into the performance, not the technology.

Sit forward, lean back
Of course you’re reminded how it’s doing things, in my case by the iPad mini on the arm of the sofa showing what’s playing and allowing me to flick on to the next track or a completely different album, but there’s a very human sense about the way music is presented: the scale is right, the dynamics are appropriate, and you can adopt either ‘sit forward’ listening, where you pay full attention to every nuance of the performance, or ‘lean back’, where you just let the music wash over you.

Even better, this balance allows it to make even low-bitrate radio streams sound involving, thanks to its inherent warmth and smoothness, while at the same time having sufficient definition and low-end extension to make the benefits of high-resolution music readily apparent.

If you like, the Sneaky DSM is a Kiko for those who don’t want their system as a talking point, but rather as simply a means to an end: it’s an ideal hideaway hi-fi solution, meaning you really only need to have your speakers and a control-point – I’ve found the iPad mini an ideal solution for this, but there’s no reason why one of the budget Android tablets now appearing in the supermarkets shouldn’t do the job.

So Sneaky by name, and sneaky by nature: the Linn will certainly fill a gap for many users, and what it lacks in visual pizazz – although you can have it in black, white or silver, and it’s built and finished to the usual high Linn standards – it more than makes up for in performance and sheer enjoyment.