REVIEW: Creek Evolution 50A – or ‘how I started testing an amplifier and ended up loving the radio all over again’

The lead-time between first seeing a product and receiving a review sample can be anything from instantaneous to ages.

Sometimes it’s a matter of ‘here it is, d’you want to take one away with you?’; on other occasions one gets to a point, about a year after the launch, where the manufacturer or distributor is getting almost as irritated by hassling reviewers as the reviewers are by the continual knockbacks from the supplier.

Then there’s small matter of promised exclusives: some reviewers won’t attend press launches unless there are guarantees of exclusivity – which would kinda make it a wasted trip for the rest of us – , just as there are certain manufacturers or distributors with a policy of only placing their products for review with particular titles, or even specific reviewers.

Some products that simply drop off the radar: you see them, say ‘yes, I’d like to review that when it’s ready’, then things go a bit quiet – and given the pressures of feeding the beast that is a monthly magazine schedule, ‘quiet’ can just as easily become ‘forgotten’.

The Creek Evolution 50A amplifier was almost an example of the last of these case-histories: I first saw it at the 2012 High End Show in Munich, when it was being shown as the way Creek was heading, and I liked the look of it from the start.

It’s a slimline, relatively frill-free amplifier with a main volume knob and a secondary selector, and eight backlit pushbuttons flanking an OLED display panel, but there’s a little more to it than that: as standard the Evolution 50A sells for £750, but it can accept a range of add-on modules, fitted internally. 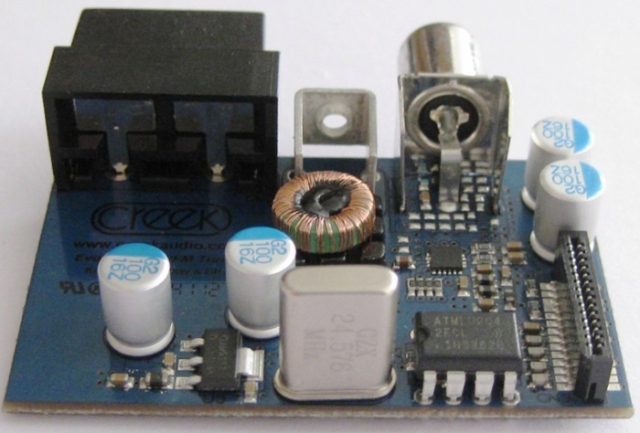 As with past Creek amplifiers, there’s a choice of phono stages available, for standard moving magnet, low output mm/high output moving coil, and standard moving coil, at between £100 and £140. However, there’s also a £125 FM RDS/AM radio tuner module, the Ambit (above), able to turn the Evolution 50A into a receiver, and a Ruby DAC module is also on the way, at a price to be confirmed.

That’s a bit of a change for Creek, which in the past has made some very fine-sounding standalone radio tuners, but the Ambit isn’t just there to fill a gap: it’s been designed by John Westlake and and Dominik Peklo of Lakewest Audio, and so has a heritage including products for Audiolab, Cambridge Audio, Peachtree Audio and Pink Triangle.

Plug in the module – the amp I received for review was, I believe, one of the first shipped with an Ambit installed – and the display turns into a radio readout when that input is selected, with the four buttons to the left of the display controlling radio functions. As well as full RDS functionality, you also get 99 presets to store favourite stations.

Why FM/AM, when there are still mutterings about analogue radio switch-off in the UK, and that annoying little animated character is all over our TV screens trying to convince us to buy digital radios – I mean, D Love, for gawdsakes – ?

The answer is to stop thinking so parochially, and view the world as does a company like Creek, selling products to many different countries: there’s still a taste for analogue radio in many areas, thank goodness, and the Ambit option is designed to serve as many markets as possible.

As indeed is the Evolution 50A amplifier: it’s quoted as delivering at least 55W into 8ohms, rising to more than 85W into 4ohms, has four line inputs, one of which also offers an XLR balanced option, and uses a a new bi-polar transistor power amp circuit with high open-loop gain and low distortion, designed by Creek Senior Engineer David Gamble, who was also responsible for the preamp section.

Building for the future
The Evolution 50A is the first time this circuit has been used, but I gather it’s going to be used as the platform for future Creek products. And on this showing, the company could have exciting times ahead: the Evolution 50A is an honest, involving amplifier, and one that’s oh so easy to enjoy.

Use it, and you soon discover that, for all its apparent simplicity, this is very much a ‘real world’ design, with no shortage of convenience features. As well as rear-panel outputs to feed an external power amp or a subwoofer, the menu system reveals tone and balance controls, adjustments for display brightness and blanking, and the ability to choose whether or not using the headphone socket turns off the speakers.

There’s also the option of ‘power amp input’ connection, bypassing the preamplifier section, on two of the line inputs: I used it during the review period to feed the front channel preouts of my AV receiver through the Creek (thus saving cable faffage when watching TV), but you can also use it with the company’s matching CD player, which has both its own volume control and balanced outputs.

The radio takes over
Since plugging the Creek into my system, I have to say I’ve been listening to a lot more radio than I have of late.

That wasn’t the plan – I was just going to have a quick listen to the tuner to see what it was like before getting on with some serious music listening from other sources – but fed from a good rooftop aerial, the Ambit plus the the Evolution 50A really connects the listener with a good broadcast in a way only the best tuners can manage.

In fact, after a long period where I’ve basically been using internet streams for spoken word when I wasn’t playing music off one of the servers at home, and not really doing any ‘full attention’ radio listening – it tends just to be on when I’m working – , I’ve not only been enjoying the Creek ‘receiver’ hugely, but have also resurrected my old Audiolab 8000T tuner against the time when the Evolution 50A needs to be returned.

The price-tag on the Creek would almost be worth it for the sheer delight it has brought playing a lot of Radio 3, but if further justification were needed, it’s also rather special as a pure amplifier, with a fuss-free delivery of a wide range of music complete with solid dynamics and plenty of detail.

Yes, you can provoke it to harden up if you really push it, which I did purely in the interests of science with a mixture of bass-heavy rock and some Bach organ works, but the ‘tipping point’ is way beyond the kind of levels most people will ever demand of such an amplifier.

At more sensible levels, and here I’m talking ‘seriously loud’ sensible rather than ‘music while you work’ sensible, the Creek has remarkable composure and a real ability to let through the textures and soundscapes of a good recording, while at the same time making the listener glad they opted for the 24/96 or 24/192 download of that title rather than the 320kbps MP3 one.

Playing the new Franz Ferdinand album from a CD-quality download, the Creek allows the music to motor along while keeping the lyrics readily available to be relished, with even the slightly hard edge of the sound failing to provoke it into harshness or excessive brightness. It’s clear that’s how the album is meant to sound, but the Creek has it all nicely under control and is using its tight, powerful bass to keep things in balance.

Switch to something a little more intimate – some tight harmonies courtesy of Alison Krauss and Union Station – and while the Creek maybe makes the sibilance in the voices at little too obvious at times, the close focus of the recording is superbly apparent, and the stereo picture entirely convincing.

There’s something of a shortage of decent midrange amplifiers on the market these days: the few big brands still in the entry-level sector are doing their bit, and up into four figures there are some interesting models on offer, but the £500-1000 market offers much slimmer pickings than once it did.

As a result, the Creek is a welcome addition to the selection out there: an amplifier with exceptionally fine performance for the money, mixed with the kind of features many people do use or may want, but which are so often overlooked in ‘audiophile’ designs.

Just like the first Creek amplifiers of just over three decades ago, the Evolution 50A offers excellent performance and fine value for money, plus some very clever engineering. It’s absolutely worth a long, relaxed audition – you may just get captivated.